The belt conveyor industry is under continuing pressure to carry higher tonnages over longer distances, navigate more complex routes and reduce contamination to the environment and to the product itself. As a result, the industry has seen significant technological advances in system design, with analysis and simulation playing an increasingly important role in ensuring reliable and efficient, fit-for-purpose systems, says Paul van de Vyver, DemcoTECH Engineering General Manager.

Headquartered in Johannesburg, South Africa, but with a global client base and a strong reference list in Africa, DemcoTECH designs and supplies bulk materials handling support to the power generation, cement, mining, metallurgical, manufacturing and port handling industries.

“Our conveyor design and dynamic analysis capabilities, together with Finite Element Analysis skills on large stockyard and port machines, are underpinned by our in-house developed design packages, which are based on ISO and CEMA standards,” says van de Vyver.

As the engineering contractor on one of the world’s largest iron ore distribution centre projects to date, Vale’s project in Lumut, Perak, Malaysia, DemcoTECH continues to provide materials handling engineering and support services for the establishment of this iron ore import, export and ore blending Terminal .

“This engineering support has included the conceptual design of the terminal, performing dynamic analysis audits on the high-capacity conveyors, detailed engineering analysis and audits on the port and yard machines on behalf of our Client,” adds van de Vyver.

others, Grindrod Terminals’ Richards Bay multi-product facility in South Africa and Koidu mine in Sierra Leone.

“Grindrod Terminals’ pipe conveyors were installed into cost-effective tubular triangular gantries, which allowed mobile maintenance trolleys to be fitted onto the gantries for access and maintenance purposes. These were supplied as part of a contract awarded to DemcoTECH for the materials handling portion of the expansion to Grindrod’s Terminal.

“For Koidu, the fact that the diamonds would be completely enclosed by the tubular-shaped belt for the major portion of the conveying distance, and therefore ensure secure conveying from the process plant to the secure area, was an overwhelming advantage of pipe conveying technology,” says van de Vyver.

Besides secure handling of the material, pipe conveyors offer many other benefits, such as being environmentally friendly without the spillage problems often associated with troughed conveyors. Pipe conveyors are able to negotiate relatively tight horizontal and vertical curves, which affords the opportunity to eliminate transfer points, reduce the overall length of the conveyor system and improve the plant footprint.

“The potential conveying distances and carrying capacity of pipe conveyors have both improved significantly in recent years due to improved conveyor analysis capabilities and advances in component design, to the extent that pipe conveyors today offer clients a realistic alternative to conventional troughed conveyors. We are receiving more and more pipe conveyor enquiries internationally for applications in excess of 5,000tph and conveying distances of 10km and more,” highlights van de Vyver.

DemcoTECH’s extensive reference list for other conveyor technologies includes the supply of conveyors to transport gold ore for Syama in Mali and a mobile ship offloading and warehouse distribution system for Grindrod Terminal’s fertiliser storage facility at Maydon Wharf in Durban, South Africa.

“The conveyors for the fertilizer storage facility included mobile conveyors that can be positioned on the jetty to suit ship docking requirements and five reversible, multi-point discharge shuttle conveyors to feed product into individual bays in the warehouse,”

In Lesotho, DemcoTECH supplied the tailings disposal system for the second diamond treatment plant at Lětseng Mine, which included two tail-driven, downhill, extendable overland conveyors, as well as a rail-mounted spreader machine.

“The Lětseng system was challenging in that the conveyors had to pretty much follow Lesotho’s undulating mountainous terrain, which in this case included steep inclines and declines en-route to the tailings dump. This required us to employ various special engineering solutions, such as the inclusion of a regenerative braking system on the tail pulley to prevent the conveyor from running away,” notes van de Vyver. “The system was also required to operate at ambient temperatures ranging from +35°C to – 20°C in wind speeds of up to 100km/h, as the operation is at an altitude of approximately 3,000 m.” 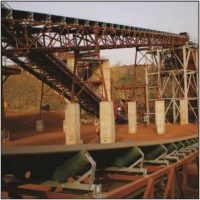 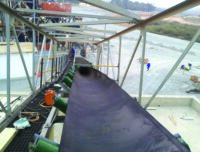