Having had a working relationship with Lětseng Diamond Mine that dates back to 2008, bulk materials handling specialist, DemcoTECH Engineering continues to service the mine’s expansion initiatives, with its most recent work focused on upgrading part of the mine tailings materials handling capability.

In 2008, DemcoTECH designed, engineered and supplied the original tailings disposal system for the second diamond treatment plant at the mine, located in the Maluti Mountain, in Lesotho, and has participated ever since in a number of studies for the mine. Current work is focused on upgrading the tailings system to handle higher capacities resulting from Lětseng’s Project Kholo, which, amongst other objectives, is aimed at increasing ore throughput.

“Following a design audit on the run-of-mine (ROM) stockpile system which we carried out for Lětseng, we are busy upgrading the ROM stacker as a turnkey contract. This involves relocating the drive of the 24 m high boom down to ground level for ease of maintenance, as well as redesigning the head arrangement to ensure that the material is distributed evenly above the stockpile reclaimer feeders below,” says Paul van de Vyver, General Manager, DemcoTECH Engineering.

In addition, a new WEBA headchute has been installed to ensure that material particle sizes are distributed evenly over the dump.

To minimize any disruption to production, the improvements to the ROM stacker were implemented during a shut down period of 10 days during February 2015.

“We have also recently completed the conveyor design and expansion layout to be able to increase the tailings dam to handle the expanded throughput,” explains van de Vyver.

Given the location of Lětseng and the fact that it is the highest diamond mine in the world, at an altitude of some 3 200 m, the system DemcoTECH originally supplied for the mine presented a number of challenges. This included the fact that the route of the overland conveyors had to accommodate Lesotho’s mountainous terrain, with steep inclines and declines en-route to the tailings dump.

“This required us to employ special engineering solutions, such as the inclusion of a regenerative braking system on the tail pulley of the extendable conveyor to prevent the conveyor from running away,” notes van de Vyver.

“The system was also required to operate at ambient temperatures ranging from +35°C to – 20°C in wind speeds higher than 100km/h on a very exposed site.”

DemcoTECH’s contract to supply the system was part of the establishment of a second diamond treatment plant at Lětseng Mine (Plant No 2), which doubled the mine’s hard rock processing capacity from 2.6 million t/yr to 5.2 million t/yr, making it the worlds’ seventh largest diamond mine by throughput.

DemcoTECH services are offered though contracting mechanisms from EPCM to Lumpsum Turnkey including studies and from concept design through to detailed feasibility studies. After-sales services include spares, maintenance, refurbishments and operational readiness packages covering procedures, systems and workplace tools required to successfully operate and maintain a new or upgraded plant. 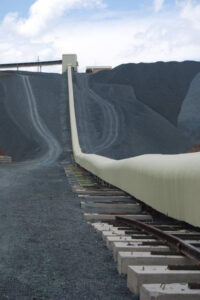 The overland conveyors designed by DemcoTECH in 2008 for the taillings disposal system accommodate Lesotho’s mountainous terrain, as well as its inhospitable climatic conditions.. 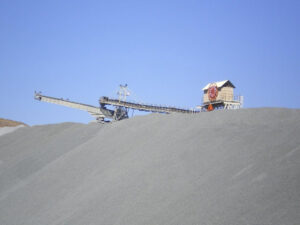 The drive of the 24 m high boom of the ROM stacker was relocated down to ground level for ease of maintenance.