As opposed to liquid bulk, containers and other general cargo, dry bulk cargo is mostly transported in loose form, determining to a major extent the storage and transport technology employed at the quay, in the terminal and at other locations before onward transportation, says DemcoTECH Engineering General Manager, Paul van de Vyver.

Johannesburg, South Africa-based DemcoTECH has been responsible for designing and installing bulk materials storage and handling facilities for a growing international client base. Its comprehensive suite of systems and technologies range from troughed and pipe conveyors through to moving head systems, trippers, stackers, sampling plants, tipplers, storage facilities and bulk material silos.

“Conveying cargo in loose form can potentially contaminate the environment and, vice versa, the material can itself be contaminated by the surroundings. With a clean environment now increasingly a major focus area of regulation and social pressure groups, we design and install equipment that complies with stringent environmental and safety requirements. In addition, we offer a range of enclosed conveying technologies such as our troughed AeroConveyors™, pipe conveyors and pneumatic conveying systems,” adds van de Vyver.

“ Projects we have been responsible for range from a clinker silo at NPC Cimpor’s Simuma Plant in KwaZulu-Natal, South Africa, through to materials handling engineering and support services for one of the world’s largest iron ore distribution centre projects in Malaysia ”

DemcoTECH was the materials handling engineering-service company on Vale’s project to establish a regional iron ore distribution centre in Lumut, Perak, Malaysia. The distribution centre includes an ore storage yard and a marine terminal which will be capable of handling more than 60 million metric tonnes per year, receiving iron ore from Vale’s mines in Brazil for distribution to customers across the Asia Pacific region. DemcoTECH also provided operational readiness services, including the preparation of operational and maintenance manuals and training modules. Work started on the facility in 2010 and the first two 400,000 DWT vessels carrying ore to the Malaysian Terminal were off-loaded early in 2014.

“DemcoTECH has in the past also been contracted by South Africa’s major shipping and logistics company, Grindrod Terminals, for projects at both its Maydon Wharf and Richards Bay terminals in South Africa’s KwaZulu-Natal province,” notes van de Vyver.

The original system conveyed material from terminal conveyors to feed a single warehouse, with the expansion extending the system to feed two other warehouses.

For Grindrod’s Maydon Wharf terminal in Durban, DemcoTECH supplied a mobile ship offloading facility, together with a new warehouse distribution system for the fertiliser storage facility. The system replaced a trucking system and comprised four 400 tph mobile, tyre-mounted conveyors which are stationed on the jetty at locations to suit the ship docking arrangements. Once the ships have been offloaded, the conveyors feed the fertiliser to a central pivoting and retractable boom conveyor. The existing warehouses were modified to incorporate reversible, multi-point discharge shuttle conveyors that feed individual bays. Fully sequenced automatic starting and stopping of the systems ensures a seamless operation, and the ability to handle different types and grades of fertilizer.

“For cement producers, we offer a full range of services from silo design and construction through to materials handling systems,” says van de Vyver.

The new silo, positioned alongside the existing silo, handles hot clinker up to 205 ºC, and features a clinker steel pan feed system that can feed clinker to either the existing or the new silo. The clinker silo consists of a 40,000 tonne free capacity, reinforced, prestressed structure with a 30 m internal diameter and 55 m height. The clinker silo has two reclaiming tunnels and a precast concrete conical roof.

The silo receives clinker from the kiln via a silo feed Aumund steel pan conveyor and discharges at 250 tph onto two reclaim conveyor belts with heat resistant belting. The clinker is then fed to either the existing plant or a new rail loading system.

Located in environmentally sensitive Oribi Gorge area of KwaZulu-Natal, the silo’s design controls dust emissions from the plant to well below regulatory requirements. 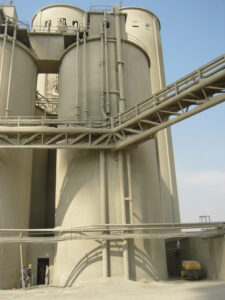 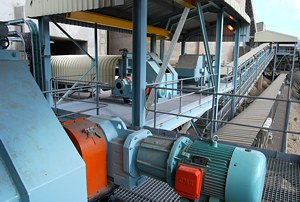 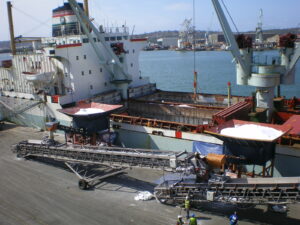