Headquartered in Johannesburg, South Africa, but with an international client base, DemcoTECH has first hand knowledge of the logistical and infrastructural challenges facing companies operating from developing nations.

“We have been responsible for a number of bulk materials handling facilities for terminals such as Grindrod’s Richards Bay and Maydon Wharf in South Africa, as well as having been responsible for the overall design for a multi-billion dollar iron ore import/export facility in Malaysia,” says van de Vyver.

As a contractor on one of the world’s largest iron ore distribution centre projects to date, Vale’s project in Lumut, Perak, Malaysia, DemcoTECH provided materials handling engineering and support services for the establishment of the Iron Ore import/export blending centre. Due to be operational in 2014, the regional distribution centre comprises a deep water jetty and an onshore stockyard to receive iron ore from Vale’s mines in Brazil and distribute it to customers across the Asia Pacific region.   In addition, DemcoTECH separately provided operational readiness services, including the preparation of operational and maintenance manuals and training modules.

“The system replaced a trucking system with a major impact on productivity of the operation,” notes van de Vyver.

The system, designed and supplied by DemcoTECH through an engineering, procurement and construction management contract (EPCM), comprised four 800 tph,1,050 mm mobile (grasshopper) tyre-mounted conveyors stationed on the jetty at locations to suit the ship docking arrangements. Once the ships have been offloaded, the conveyors feed the fertiliser to a central 32 m long pivoting and retractable boom conveyor.

“A very important feature to ensure optimum efficiency was the fully sequenced automatic starting and stopping of the systems, which ensures a seamless operation, with no blockages or hang-ups, and the ability to handle different types and grades of fertilizer,” says van de Vyver.

Also for Grindrod Terminals, DemcoTECH was responsible, through an EPCM contract, for the materials handling portion of the expansion to its multi product terminal at the deep-water port of Richards Bay, on the east coast of South Africa. The scope of the contract covered providing the materials handling to convey various materials, but mainly rock phosphate and coal, from the three Richards Bay terminal sites: Navitrade, Kusasa and Valley.

At Navitrade, which has a capacity of 1,000 tph, a tippler discharges material onto three 1,200 mm wide belt conveyors . The second conveyor discharges either onto the third conveyor, which feeds an open stockpile at Navitrade or to a pipe conveyor (340 mm in diameter and 516 m long). The pipe conveyor feeds the Kusasa transfer house, which distributes the material either to the existing export line or to Kusasa conveyors that feed the Kusasa warehouse. The Navitrade stockpile is equipped with front end loaders, which reclaim material via a Buffalo feeder discharging the material into a pipe conveyor.

The 2,000 tph materials handling system at the Valley terminal site was an extension to plant supplied previously by DemcoTECH, which conveyed material from terminal conveyors to feed a single warehouse. The expansion extended the lead conveyor to feed a choice of two other warehouses. This involved modifications to the existing 1,350 mm belt conveyor to accommodate a moving head to discharge the material either onto an existing stream or onto either of two 1,200 mm wide belt conveyors, which have a total length of 60 m. These discharge onto two 1,350 mm dedicated warehouse feed belt conveyors, which in turn feed the dedicated warehouse via a travelling tripper.

“As this was a brownfields site at a very large terminal, the interfacing of new equipment into the existing equipment had to be carried out around planned shutdowns in order to minimise disruptions to operations,” noted van de Vyver.

“These projects showcased our comprehensive range of systems and technologies that we are able to design and supply for the port handling industry. This ranges from conveyors through to moving head systems, tripper systems, stackers and reclaimers, sampling plants, storage facilities and bulk material silos.

“Our experience and expertise in conveyor systems cover the full spectrum of overland and in-plant conveyors and we specialise in pipe conveyors, having supplied these systems using a triangular tubular gantry fitted with a mobile maintenance trolley.”

“With regard to sampling plants, we established an iron ore sampling plant at the Saldanha iron ore terminal in South Africa for Kumba Resources, later completing an upgrade to the facility, which allows the sampling of a wide range of iron ore products, from fine material to lump ore for export purposes.”

The upgrade converted the sampling plant from a mass to a time based system, which reduces bias in the selection of material sizes for sampling purposes. The upgrade was carried out on a shutdown basis to minimise any demurrage fees.

The turnkey upgrade project covered installation of new conveyors to feed the sampling plant, addition of load cells into the weigh hopper for more accurate readings and introduction of a two way splitter.

This automated iron ore sampling plant enables Kumba to assure quality that complies with the world’s highest International Standards Organisation (ISO) benchmark. During the process, samples are taken from the supply line, en route to the ships, and are introduced into a fully automated robotic laboratory where they are prepared simultaneously for physical and chemical analysis. The sampling facility has two conveyor streams, with single product loading possible using either conveyor.

The sampling facility, which is an open access facility available for use by all iron ore exporters using Saldanha, enables exporters to have the physical and chemical qualities of iron ore products certified independently before they are loaded for export. The facility was designed to comply with ISO 3082 and facilitates a quick turn-around time.

DemcoTECH services are offered though contracting mechanisms from EPCM to Lumpsum Turnkey including studies and from concept design through to detailed feasibility studies. After-sales services include spares, maintenance, refurbishments and operational readiness packages covering procedures, systems and workplace tools required to successfully operate and maintain a new or upgraded plant. 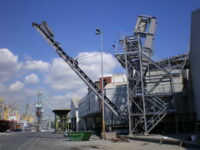 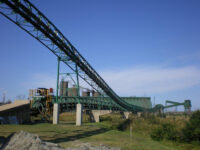 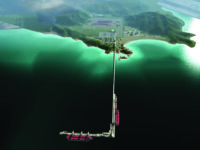